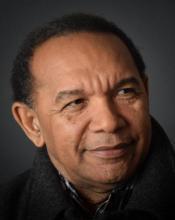 Afro-Brazilian poet and composer Salgado Maranhão was born in the village of Canabrava das Maças, where he spent much of his youth in the fields. His taste for poetry and for music came from the troubadours who passed through the village. He went on to study journalism in Rio de Janeiro. Along with his prodigious poetic output, (his poetry has been translated into English, German, Italian, French, Swedish, and Japanese), as composer and lyricist his songs have been recorded by such Brazilian artists as Amelinha, Elba Ramalho, Ney Matogrosso, Paulinho da Viola, Rosa Marya Colin, Vital Farias, Zizi Possi, and Ivan Lins. In 1999, he was awarded Brazil’s most prestigious literary award, the Prêmio Jabuti, for Mural de ventos, and in 2016 he was awarded the prize again for Ópera de nãos. In 2011 he was awarded the poetry prize from the Academia Brasileira de Letras for A cor da palavra.