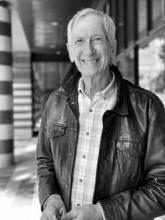 Kit Robinson is a Bay Area poet, writer, and musician. He was born in Evanston, Illinois in 1949, graduated from Walnut Hills High School in Cincinnati, and earned a BA in philosophy and English literature at Yale University. He is the author of two dozen collections of poetry, including Quarantina (Lavender Ink, 2022), Thought Balloon (Roof, 2019), Leaves of Class (Chax, 2017), Marine Layer (BlazeVOX, 2015) and The Messianic Trees: Selected Poems, 1976-2003 (Adventures in Poetry, 2009). Recent poems appear in Brooklyn Rail, Blazing Stadium, Cold Mountain Review, Exquisite Pandemic, Three Fold, and Traffic Report.
A collaborator on The Grand Piano: An Experiment in Collective Autobiography, San Francisco 1975–1980 (Mode A, 2010), Robinson has taught with California Poets in the Schools, performed with San Francisco Poets Theater and, with poet Lyn Hejinian, produced In the American Tree: New Writing by Poets, a weekly Bay Area radio show of interviews and readings. Kit has received fellowships from both the National Endowment for the Arts and the California Arts Council, as well as an award from the Fund for Poetry. His papers and media are collected at The Bancroft Library, University of California, Berkeley.
Robinson’s  essays on poetics, art, travel and music may be found online at Open Space, Jacket2, and Nowhere. He lives in Berkeley and plays Cuban tres guitar in the charanga band Calle Ocho. Keep up with him at his website, https://kitrobinson.net/