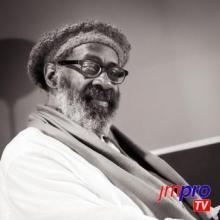 R.  Zack Zachary is an independent Chaplain, an inspirational Poet, Storyteller, Singer, Visionary, and Activist. His presentations combine life, music, poetry, history and storytelling with positive and holistic perspectives of how we will win our fight for freedom, justice, and peace.

Zack majored in Voice upon entering college.  Later was accepted in The Atlanta Symphony Orchestra Chorus under Maestro Robert Shaw.  After volunteering for the military to keep from going to Vietnam; his musical talents were noticed and he became a member of the 7th Army Chorus in Heidelberg, Germany  and traveled over Europe.

Zachary became an activist at age eleven and four years later met Dr. Martin L. King at a Mass Meeting in his hometown, Anniston, Alabama.   From that renowned meeting, he has continued throughout the years to follow a path of  Activism, Peace and Love for All.  He was squarely involved in the Civil Rights Struggle in high school; attending Mass Meetings every Sunday night and participating in school boycotts and marches in Alabama.

Zachary continued this activism in  college and when he  went into the military.  He, with three other GI’s started a group to bring more awareness to the causes of race and unfairness in the military.  His first poem, Old Beautiful Flower’ was written during this time.  He lead one of the few demonstrations ever in the military on the US Army Headquarters in Heidelberg,Germany.

Zachary founded both the Healing Love Institute and Dialogue Cafe, along with ‘Ankhe’ Linell Todd; after they relocated to Asheville in 2005.  The Healing Love Institute and Dialogue Cafe (Getting America Talking Again) came out of his years of activism and working to enhance life in a holistic manner. The Dialogue sessions began in Asheville and Atlanta and have been given in thirteen different cities. He is the author of two books of poems:  “21 Love Poems of Sad Joyousness” and ‘Behold America, BeWHole’.
Zack presently resides in Asheville, NC in a community promoting sustainable and holistic living.

1/5/23: Deadline for submission of proposals