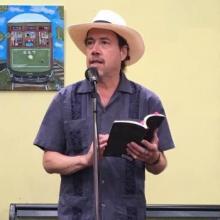 Mark Statman has written eleven books; his most recent is the book of poems, Hechizo (Lavender Ink, 2022). Statman’s other poetry collections include Exile Home (Lavender Ink 2019), That Train Again (Lavender Ink, 2015), A Map of the Winds (Lavender Ink, 2013) and Tourist at a Miracle (Hanging Loose, 2010). His translation collections include Never Made in America: Selected Poetry of Martín Barea Mattos (Lavender Ink/diálogos, 2017), as well as Black Tulips: The Selected Poems of José María Hinojosa (University of New Orleans Press, 2012), the first English language translation of the significant poet of Spain’s Generation of 1927, and, with Pablo Medina, a translation of Federico García Lorca's Poet in New York (Grove 2008), Statman’s poetry, essays, and translations have appeared in over 20 anthologies, as well as such publications as New American Writing, Tin House, Hanging Loose, Xavier Review, Ping Pong, and American Poetry Review. A recipient of awards from the NEA and the National Writers Project, he is Emeritus Professor of Literary Studies at Eugene Lang College of Liberal Arts, The New School, and lives in San Pedro Ixtlahuaca and Oaxaca de Juárez, Oaxaca, MX.